For a better experience on Cayman Contractors Association, update your browser.
This website uses cookies to help us enhance your browsing experience. By using this website you consent to our use of these cookies. To find out more about we use cookies, how to manage them and your personal information, please read our Privacy Statement & Policy.
Advertise With Us 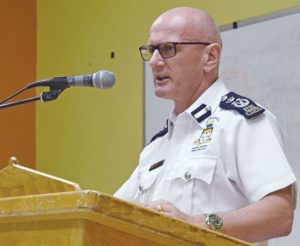 Her Majesty’s Cayman Islands Prison Service graduated the first class from its release on temporary license rehabilitation program, which allows for inmates to be temporarily released for job-skills training, paid or unpaid work, and other approved activities.

The program entailed inmates undergoing professional training and working for a business for between six months and one year, said government information officer Jamie Hicks. Inmates are paid by the companies they work for, and can access the money once they complete their sentences so they have money when reentering society, she said.

Prisoners can only be admitted into the program after being assessed to make sure they do not pose a risk to the community while they are on release, according to the prison’s policy on the matter.

A ceremony was held on Nov. 22 for the 24 program participants to recognize their hard work, according to a press release from government.

During the ceremony, several participants took the stage and explained how the program gave them a fighting chance outside the prison walls.

The individuals were presented with a certificate for completing the release on temporary license rehabilitation program, and the participating businesses received a plaque to recognize their role in the positive initiative.

“I am proud to say we have helped so many inmates increase their chances of successful reintegration into society,” Prison Director Neil Lavis stated in the press release. “These offenders have worked hard to not become a statistic, and change their life for the better.”

Mr. Lavis also thanked the businesses that have participated in the program, and urged more companies to become involved.